The 1st International Conference on Geopolitical Crises in the Islamic World will be held on 15-16 November, 2016 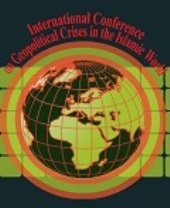 Geopolitical crisis is the result of conflicts and tensions between countries, political-spatial groups and political actors to control one or more values or geographical factors. Crises have different sources and types, which functionally lead the system to an imbalanced state and can disrupt the normal situations, spatial-geographical process and habitat for humanity.

Geopolitical crises include these features:

a) The issue and factor of crisis is to intervene and control one or more values like location, space, position, water, mineral resource, territory, minority, shrine, export market, transfer of goods, energy, tourism, island, strait, border line, religious site and so on.

b) Geopolitical crisis has relative stability and permanence and it is not easily solvable and removable, because the issue of crisis and tension is considered under national and collective interests.

1.    Establishment of friendly relations and goodwill among two sides of the crisis.

2.    Divisibility of geographical value and conflicting benefit, in a way that each of the claimants reach a desirable contribution and satisfaction achieved.

3.    The imbalance of interrelation of power in a way that one side of the conflict has the hegemonic power and convinces the competitors and counterparties to accept their demand in the shadow of their saber-rattling and take the control of the disputed geographical value, like the Kuril Islands in north of Japan, which is under the Russia’s control.

If geopolitical crises are not peacefully resolved, the permanence of crisis can lead to war.

d) Although geopolitical crisis take political form, they lasts for a long time.

e) Multilevel intervention model is formed in the geopolitical crises. In other words, different levels of actors involved in the crisis. The actors involvement in geopolitical crisis is done on the basis of various objectives such as humanitarian motivation and contribute to international peace and security, pursuing the objectives and national interests, promotion of geopolitical position in regional and global system through taking the management and leadership of resolving the crisis process that can be associated with approach of reconciliation or permanence of crisis. Different levels of actors’ intervention in the geopolitical crisis are considered as:

1. Claimants and parties of the conflict or local level

5. Regional and international organizations such as the United Nations and the Security Council.

At present, the Islamic World is facing different geopolitical crises. Takfiri groups crisis, powerful countries intervention in weak states of the region, competition and tension between neighboring countries, ideological rivalries, ethnic crises, cultural breaks, economical challenges, illegitimacy, and crises like them that have been made political and governance structures of Islamic countries face to the challenges.

3. Common functions and interests which lead to functional equivalence and common interests.

4. Mutual needs and bilateral or multilateral dependence which reflects a kind of supplementary in the functional areas of economic, social, cultural, security and etc, based on each member’s interests.

5. Geopolitical position and hegemonic power that assume a major role in the establishment and leadership of convergence.

6. International and spherical requirements that make inevitable the comprehensive and global integrated management.

According to the above mentioned theme, this conference with the aim of resolving Islamic countries issues, tries to anatomy and finally provide solutions to the present challenges in the Islamic world