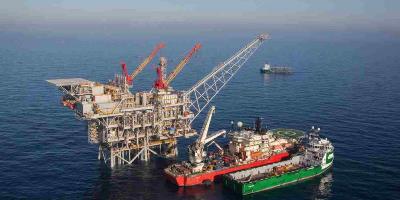 At the end of the twentieth century, after the international oil companies emphasized that there are natural gas fields located in the northern waters of Alexandria and Port Said, the first exploration began in Israel’s offshore waters. Israel initially faced with many challenges. The first exploration was not as much as enough to be able to become a self-sufficient country and export the gas.

Afterwards important explorations were made in the northern waters of the Mediterranean Sea. Between 2009 -2013, several gas fields were discovered in the deep waters of the Mediterranean Sea. The most important gas fields are “Tamar” and “Leviathan” and “Karish” which is about ten miles offshore of territorial waters of Lebanon. Tamar gas field is 80 km away from the port city of “Haifa” in the Mediterranean Sea and it has strategic importance for officials in Tel Aviv. This field was exploited in 2013.  Leviathan gas field is located roughly   130 km west of Haifa .The reserve size being estimated at about 510 billion cubic meters. Furthermore, other gas fields have been discovered such as Nova, Marie, Dalit, Ruth, henna and so on. As to this, Israel is attempting to allocate a portion of Leviathan gas field capacity for export and save some gas for the future and do the greatest discoveries in the next years to export gas. Although, Israel was one of the energy importers and the largest consumers of natural gas in the Mediterranean and before 2013 was largely dependent on gas imports from Egypt (Egypt provided40 percent of energy needs for this regime), but in 2020 it gradually will become a gas exporter. In fact, if Israel’s plans for exploration and sale of natural gas realize, within 30 years it will earn about $ 150 billion. Many steps have been taken to achieve it. As a matter of fact, if all plans go well, Israel will be one of the major exporters in the region. But to achieve this there are many challenges to deal with.  The following article examines the regional challenges in terms of turning into a gas exporter.

– Dispute with Egypt and Recent Gas Discoveries in Cairo

A few years ago based on a 20-year contract Egypt was selling gas to Israel. But in 2012, extremists attacked pipelines in Egypt’s Sinai Peninsula and gas export was stopped by Egypt. Although,  because of compensatory payment of 1 billion and  760 million dollars  Egypt being forced  to negotiate with Israel for importing gas from Israel’s  new fields in the Mediterranean Sea and   even it was  supposed to Israel export gas to Egypt through an underwater pipeline for 10-15 years,  and  Egypt  became an importer of natural gas  rather than an exporter. But recently, one of the largest natural gas fields of world was discovered in the coasts of Egypt and it is expected to provide Egypt’s gas needs in coming decades.  This gas field with potential reserve size of 30 trillion cubic meters was explored when Israel hoped to sell gas to Egypt and Egypt was considered as the first market for gas sales and export. In this situation, loosing Egypt as the first market for exporting gas came as a terrible blow to Israel and the Egyptians stopped to reach   agreement with the Israeli side. It should also be noted that due to the lack of precise sea boundaries and exclusive areas in the eastern Mediterranean, gas resources in Leviathan are still in dispute and can be important challenges on Israel gas export.

– Challenge of Gas Export to Jordan

About 90 percent of Jordan’s energy need is supplied by importing and after frequent disruptions and intervals on gas import from Egypt, Jordan seeks the guarantee for security of energy supply. Meanwhile Jordan signed a peace agreement and it is considered by Israel for gas export. On the other hand, the Israeli government has signed memorandum of understanding with Jordan on extraction of  gas from Leviathan gas field. Even the Prime Minister of Israel has confirmed an agreement to sell the gas of Mediterranean gas field to Jordan for more than 15 years. But it  has not been subject to contract and  in the past year dispute between Jordan and Israel Caused the Jordanian parliament’s energy committee  disagreed  with  gas import from Israel. Besides, it should be noted that there are various options open to Jordan including importing Gas from Iran and Qatar that  can be a major challenge to Israel’s gas export.

– Challenge of dispute with Lebanon

Although Israel claims that it seeks to get permission to extract oil and gas from  its own marine and coastal areas, but Lebanon is opposed to Israel’s maritime  border map and has offered its own map to UN in 2010. In this regard, Lebanese authorities believe that southern Lebanon deep waters contain 12 trillion cubic meters of natural gas. Karish gas field is located in 4 Km of the territorial waters of Lebanon and Tamar gas field which is important to Israel is near the Lebanese maritime borders. Meanwhile, being in the war status, the consensus on the Lebanese border disputes cannot prevent the use of the country’s gas reservoir and Lebanon has warned Israel to respect its maritime and oil rights, on the other hand, Hezbollah is always ready to damage on the Israeli gas installations in the sea and the failure to solve this problem, can be a major challenge to Israel’s gas export.

– The challenge Of Dispute With Palestine

Apart from   approach based on Israel’s occupation, only part of the gas reservoir in Mediterranean Sea belongs to Israel from the view of most of states. If we take a look at the Palestinian coastal gas resources, in 1999 more than 1.1 trillion cubic meters of natural gas was discovered in Palestinian territorial waters off the coast of Gaza.  Moreover, in 2014, the Palestinian government declared that a new gas field has been discovered in Mediterranean Sea which is located in Al- Nasirat in the middle of the Gaza strip.

Although according to Camp David Accord, sovereign rights of the Palestinian officials in the sea have been recognized by Israel, but it is still excluding Palestinians   from their rights. It has coiled on these resources directly and indirectly. With respect to this point, in 2007, Israel’s defense minister clearly stated that Hamas must be forced to abandon the Mediterranean Sea and being satisfied only with its coasts. Although  Israel seeks to reduce Palestinian boundaries and sea areas  and  seize  the gas fields,  but  remaining challenges with Palestinians over the gas resources , will  face  a serious challenge to Israel gas export .

Despite emphasizing on the existence of natural gas in a nearby gas field since the late twentieth century, Israel has dealt with many challenges for short- term and mid-term exploitation.  In fact extensive need to domestic and Mediterranean gas and strategic importance of it for Israeli government is while dispute between Israel and Arab countries over resources continues and it may even lead to conflict with Lebanon and Gaza.