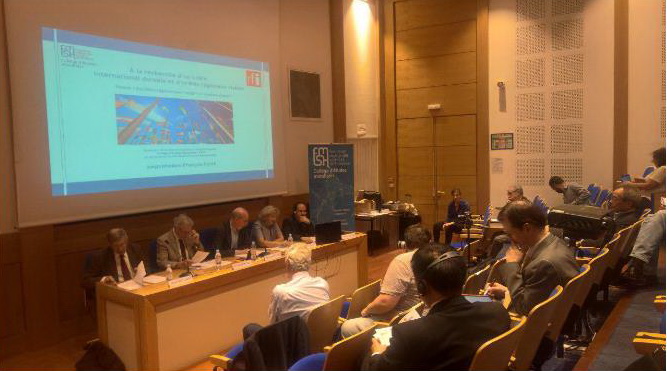 In Search of a Sustainable International Order and Viable Regional Orders

I come from a region in which 2 of the most ancient civilizations out of 5 in the world is located.

The region includes 17 countries; its population is 400 million people more than that of Oceania; and having an area of 12 million square kilometers, it is bigger than both Europe and Oceania. Also, in third decade of the 21st century, more than 80% of oil global energy resources would be located in this region.  The region is the lifeline between 3 continents, Europe, Oceania and Africa. Having world’s most important compulsory sea passages (chokepoints) like the Straits of Hormuz, Bab el-Mandeb, Malacca, Bosporus, Dardanelles and Suez Canal, the region had a geostrategic importance in the world.

But now, beside all mentioned issues, unfortunately this region has become the red spot of insecurity, war, religious extremism and instability on Earth, according to which not only the region but also all other parts of the world suffer its negative impact on their security. Therefore, the endeavors taking place in this conference to investigate the region’s security would be fruitful for both the countries of the region and the whole world.

The security issue of Middle East is so complicated and due to multiple factors of different conflict layers’ influence on each other, is compared to a Gordian knot by some experts. We believe that a suitable solution is not impossible; but to provide solutions to move towards stability and security, we should have an applicable division of effective layers affecting insecurity in the region.

The crises in this region are divided into 3 groups, which I would briefly mention.

2.     The border crisis and territorial disputes such as:

–         Egypt and Sudan dispute on triangle of Halayeb and Shalateen

3.     The identity crisis due to the great disappointment on the failure of the Arabic nationalism led by Jamal Abdel Nasser in the Arabic Middle East

4.     The crisis caused by the incomplete and superficial nation-state building in Arabic Middle East after the collapse of the Ottoman Empire and the Sykes-Picot Agreement

B) The crisis caused by the public culture of nations

1.     The social crisis caused by dealing with traditional culture and modernism; and unsolved conflicts resulted by

2.     Dogmatism and lack of tolerance culture among the nations of the region

3.     Promotion of tribal culture in some nations in the region

C) The crises caused by the governments

1.     The crisis caused by the oil states and Rentier economies

3.     Rented security: inability to create a intra-regional security system and switching to trans-regional powers to secure the region

4.     The crisis of government legitimacy by people which has strengthened the dependence of some of oil states to make concessions in return to a guarantee for survival

6.     Bureaucratic corruption and inefficiency of many governments

7.     Powerful states dissatisfied with the conditions of the region and active to change the regional equations in favor of their interests, including Saudi Arabia, Iran, Qatar and Turkey

8.     Widespread distrust among governments of the region

Middle East crisis is largely the result of interaction between the mentioned layers. But what should we do?

Spencer Johnson in a metaphor in his book, “who moved my cheese?”, for moving big cheese says, “It cannot be moved at once, but piece by piece.” It seems that among the three categories of the above mentioned crises, the first, second and third categories can respectively be improved in long term, medium term to long term and short term to medium term condition. Therefore, the best and reasonable approach is to start from the third category.

Providing a security model for the region needs a broad time with participation and consultation of a group of elites; but in my limited time I try to name some points that guide us toward just peace and sustainable security in the region.

To establish sustainable security in the Middle East, we need to reform. These reforms should be in three levels of statesmen, socio-scientific elites and the nations. For the three above mentioned levels the following points appear to be useful:

1.     Trying to define and develop a cosmopolitan identity versus religious and national identities

2.     Supporting and highlighting the moderate elites by international organizations and trans-regional countries

4.     Promotion of objectivity instead of subjectivity

5.     Promotion of tolerance to accept differences and to have peaceful environment (good neighborhood policy)

6.     Competing on selling arms in this region; having economic benefits for many foreign powers, has turned the region into a large cache of gunpowder. When we consider the mentioned issue with some tribal states, lack of rationalism and large scale corruption in some countries, it would increase the possibility of the insecurity affecting other parts of the world. Turning the region into an arsenal is not in favor of any countries and it must be limited. Global security is in priority to economic interests of some of these arms companies.

7.     Strengthening rationalism and result-orientation in the region by moderate experts familiar with International norms

8.      Trans- regional interventions in long term, even with the best intentions, will have negative consequences.

9.     Regional awakening is the most important thing in the region. This regional awareness must be based on global considerations and global norms; but should be done through genuine regional solutions.

10.                        Peace, security and stability considerations in the region must be in priority for western countries and international organizations rather than national interests and financial advantages of oil windfalls of some countries of the region

11.                        Study and attention on the largest and most important groups of religious extremism such as al-Qaeda, Taliban and ISIS shows that Salafi thought is their common and intellectual source of all evils. The world must resist against the Salafism without any considerations. As you know, the promotion of such thoughts is even threatening Europe. Yet, there is no strong will to deal with the promoters of this idea in the world; and that is all because of financial benefits.

12.                        The EU has been successful in passing from crises of identity extremism (Fascism and Nazism) to the European collective identity, from extreme sectarianism (Thirty Years War) to religious coexistence and from war for insatiable conquest (World Wars I, II) to attention to internal development concept and enhancing the quality of life in achieving financial benefits of cooperation rather than conflict and arriving at political integrity through economic integration. This route is one of the valuable experiences of human being that can be useful for the Middle East. In this regard, it is recommended that EU, states concerned in peace and stability in the Region and some organizations such as CMI should play an impartial mediation role between elites and state of the region. As such, it can be both a ground to transfer the experience of sustainable peace and a ground for the formation of constructive dialogues between the states and the elites toward transparency, prevention of misunderstandings and moving to reduce conflicts.

At the end I want to say that as mentioned before, unfortunately, the outlook of conflicts in Middle East, whether geographically and on water crisis or competition over spheres of influence, or dominant political culture of the region, would be interpreted as a warning about a risk. Continuation of current trend would lead to the growth of barren disputes which are harmful for all regional players and has no winner.

But what must be done?

Now is the time right time for big but difficult decisions. Waste of time is a detriment to stability, development and just peace in the region.

Making such decisions can be hard but if made and investigated correctly, can be in favor of countries.

In state domain, as I mentioned before, one of the most important issues in the region is the proxy wars done by regional powers like Iran, Saudi Arabia and Turkey due to their dissatisfaction with status quo to expand their influence area. What we need is a basic step and a big decision, and that is, an agreement on stabilizing the current situation and the current spheres of influence. Now, all three significant players are in search of increasing their proportion and being satisfied by the present situation seems difficult. But it will be different if futures studies (futurology) is done.