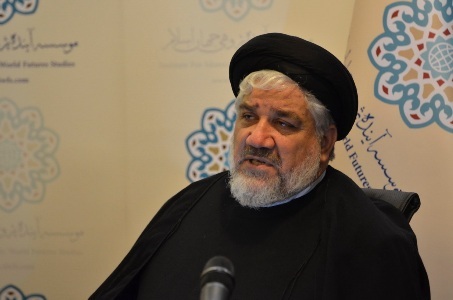 “The Relation between Saudi Arabia and West: the Strengths and Weaknesses and its impact on the relations between Iran and Saudi Arabia, with emphasis on the context of Iran-Saudi Arabia conflict”

Today, Saudi’s government is one of Iranian enemies.  We should identify and examine our enemy’s strengths and weaknesses scientifically and realistically without emotions so that based on realities, we can plan to control our enemies and predict all possible scenarios. “Miss-Calculation”, “Miss-information” and “Miss-understanding” are 3 major strategic mistakes that given the Iraq’s war and local clashes with US, we must drastically avoid them.

The history of relations: The gene, base and foundation of Saudi’s government are Anglo-Saxon.

The first period, the period of formation and separation from Ottoman Empire until the World War II in which it was absolutely depended on Britain.

The second period is from World War II to 1971, Britain withdrawal from the Persian Gulf: in this period, the economic relations with the United States are formed, but in politics, Britain remains the absolute power over the Saudi Arabia.

The third period is from Britain withdrawal from Persian Gulf to Arab Spring. During the time, the United States plays the main role in Saudi Arabia. Their military, political, economic relations are expanded. Saudi Arabia’s foreign policy, influenced by United States and Britain, is a passive and conservative.

The fourth period is from the collapse of Ben Ali in Tunisia and Mubarak in Egypt until now. This is the time of independent aggression policy and then coordinated policy with western countries to curb the Arab Spring and control the expansion of Iran’s influence in Arab Middle East. During this period, the interests of the radical wing of the United States and Israel have overlapped with Saudi’s interests in controlling the Iranian influence in the region.

Now, Saudi Arabia is equipped with the best western weapons along with training to curb Iran and not to curb Israel. Controlling Iran with Saudi’s budget is a new policy of the United States and Israel.

Getting closer to Israel, after the Arab Spring and JCPOA, became the diplomatic strategy and national security of Saudi Arabia.

Strengths (The Relation between Saudi Arabia and West):

1-      Attracting Western engineering and management in the field of oil and economic infrastructures such as airport, road and bridge, steel factories, petrochemicals, cement.

2-      Obtaining advanced Western weapons, particularly in the airspace, radar, and missile defense system. Saudi Arabia’s other use has been the acquisition of advanced Western weapons, especially in aerial, radar and missile defense systems. Specifically, today, Saudi Arabia is almost the third largest air power in the Middle East after Israel and Egypt. And is an aggressive force with the highest number of F-15s after the United States and Japan.

The $ 460 billion recent contract between Saudi Arabia and the United States contains $ 110 billion buying military equipment, part of which is military training. Yemen war is a space and training opportunity for the next target, which is Iran.

In the field of missile defense, Saudi Arabia has received some technologies such as Patriot 2 (1990), Patriot 3 (2014) and Todd anti-ballistic system (2017), from the United States. These three models are highly advanced missile defense systems.

3-      Access to the Western markets for the investment and sale of petrochemical products.

4-      Advanced academic education. Advanced university education is another positive achievement of Saudis during the pasta years. Also, all the descendants of princes and their elites study at the best American universities and then return to Saudi Arabia.

6-      In total, relations between Saudi Arabia and the West, especially the United States, have transformed this country from the desert region into one of the most important energy poles in the world under in light of Aramco.

In 1933, King Abdul Aziz signed the exclusive exploration and exploitation contract with California Standard Company, which was 75 percent in favor of Americans. In 1980, Saudi Arabia, now turning it into a major oil giant, gained full control of Aramco.

In fact, the economic relationship between Saudi Arabia and the West has transformed Saudi Arabia over a 50-year period from a deserted country into a major oil and gas power in the world, which is a member of the G20 and plays a fundamental role in the global economy, and is the number one power in the region. Here we have the Saudi Arabia’s oil relations with the United States:

–          1933: A monopoly contract for the exploration and exploitation of oil with California Standard Oil is signed between Saudi Arabia and the United States. 75% America and 25% Saudi Arabia.

During this period, Saudi Arabia discovered fields of oil and gas, used the advanced American oil technology and built the largest oil and petrochemical refineries, and transferred investor and technical know-how to the country and became one of the major players, at the very least, in the world’s energy field and then in global policy.

In 1988 the company is renamed to Saudi Arabia’s Oil Company. The name of America has been deleted and the name Aramco is no longer American. Thus, over a 50-year period, Saudi Arabia succeeds in attracting advanced American technology, gaining investment and access to the market through communication with the United States.

7-      Creating a widespread mosque network to promote Wahhabism in major US and European cities.

Saudi interests are now overlapping with the interests of the United States and Israel.

Weaknesses (The Relation between Saudi Arabia and West):

1-      If there is a deal between Iran and the West, Saudi Arabia loses the ability to use the West to confront Iran, something that has cost it thousands of billions of dollars to date.

2-      The dependence of Saudi national security on the West

3-      Flexibility and compromise with Israel, the Arab States’ enemy

4-      Absolute military, technological and scientific dependence on the West