Contemporary Takfiri Groups in Syria and Their Consequences Dr. Ra’ouf Sheibani The Former Ambassador of Iran in Syria 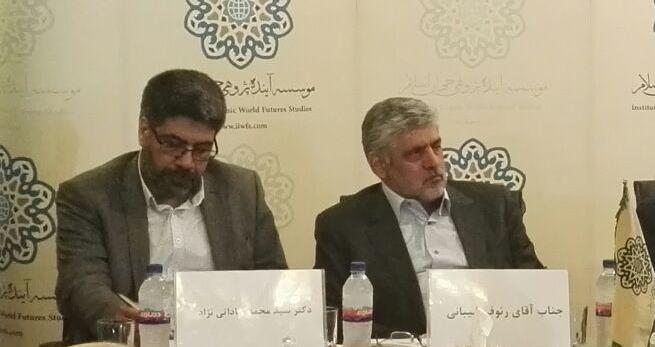 Contemporary Takfiri Groups in Syria and Their Consequences Dr. Ra’ouf Sheibani The Former Ambassador of Iran in Syria

Beside Salafi and Takfiri thought fundamentals and also motives behind their move, I would explain the issue from operational point of view.

Because of working conditions and living in Syria for a while (near five years), I had the opportunity to get in touch with some of clerics and scholars close to this trend.

As said before, Salafism history in Syria is clear. In fact, Ibn Taymiyyah is a Syrian figure who created a movement and issued decrees and fatwas which later became the basis for Salafi and Takfiri groups and movements. Wide range arrests and killings committed by Syrian government in 1980s removed one of the undisputed rivals of Ba’ath Party; but it was temporal and the roots of such thought remained and concealed in society waiting to lurk. Immigration of a significant part of leaders and people relative to this flow to other countries specially Saudi Arabia encouraged the tendency for the growth of Salafi- Wahabi thought in Syrian religious body.

In my recent studies, I found out that the Salafi movement in Syria can be divided into 3 groups: 1) Moderate Group, 2) Scientific and Traditional Group, 3) Jihadist Radicalism. The first 2 camps whose schools of thought are close to the Muslim Brotherhood do not accompany armed movements to overthrow the government. It also should be noted that they have differences in introducing political Islam. One of them is “Harkat-ul Muminun al Musharikun” leaded by Sheikh Louie al- Zoubi in Daraa, South of Syria. The second group, scientific and traditional group, also shares the same aim as Jihadi Radicalism. But they act differently in procedures and tactics. Sometimes even it helps Jihadi Radicalism in logistics. Experts know them as Sururism (or Sururi Movement), because they support Mohammad ben Surur. As an example we can name Ahrar al-Sham. The third group, Jihadi Radicalism can be divided into 2 groups; one group is local or national Jihadi Salafist which is domestic. The other group is transnational or migrants. For example, Ahrar al-Sham or a great part of Al- Nusra Front are from the first group; but Daesh, Al- Qaida and others which came from other countries, are located in the second group.  Rifi areas were the best place for the first group. To mention the reasons, I would say that Wahabi clerics from Saudi Arabia went to Rifi areas and started promoting the Wahhabi thought which was neglected by Syrian Government. In fact, one reason for the rise of Salafi and Takfiri thought in Syria was that the role of Wahabi Clerics before the crisis was neglected and provided a good ground for promoting the thoughts of these groups. Imagine that an armed group of Salafi thought come to an area and get located without any problem or any popular reaction. For example the city of Idlib in less than 48 hours falls and is occupied by armed groups but you do not see even the slightest popular protest. The practices done by Wahabies in recent years have provided the ground for armed groups’ presence. Most of these Takfiri groups have the same principles; first, they see themselves as chosen people. Second is belonging to the Promised Land. Daesh see Dameq region in province of Raqqa as their Promised Land. Another principle for them is getting the rest of people in service, or violence is considered as a gift from Allah; it means that God has commanded: “And fight them until there is no fitnah.” Another principle is that they believe, “you should live in isolation in every society in which you live; there other thoughts that can be recognized.”

In battle field, there are some contradictions and differences between these groups as I mentioned in local and trans-local (national) divisions. At first, the national stream thought that immigrants could help them to achieve the agreement; but gradually it caused the division. Local people get into the point that immigrants are more a burden to the revolution than being helpful. That’s why we see conflicts in different zones or that Abu- Mohammad al-Julani refuses Abubakr al- Baghdadi’s invitation and says “you don’t Syria. You aren’t acquainted with Syrian society. Your behavior and lack of awareness on Syrian social forms has reduced the tendency of society toward us and put us in trouble.”

Even they say that one of the main reasons of Aleppo collapse was the immigrants’ behavior. That’s true- before Aleppo events, since turkey faced serious problems with Kurds, ordered the forces to evacuate Aleppo and go to Al-bab region to defend Turkeys’ interests against Kurds. They believe that Aleppo’s battle field lost its protector and this was the reason for the downfall of Aleppo. Also their approach made a lot of division in the domestic trends within Syria, as many Syrian Army officers from Free Syrian Army joined groups like Daesh. Or they said that threatening religious minorities has caused the problem. Or threatening other countries has caused the situation that any foreign country do not support us in our revolution condition.

As said before by Dr. Hamzeh Safavi and Dr. Salman Safavi, the reason for the growth of this thought in Syria can be divided into 2 groups, namely the general reasons and the specific ones that the latter is specific to Syria. In relation to the general reasons, we can point to the events in Egypt, Sadat’s behavior to use extremist Islamists against Nasserites. Another reason (specific reasons) is about this region which is the occurred events in Afghanistan. Arabic media, satellite development and its religious programs have a great influence on the growth of Salafism. Even one of reasons for deepening and penetration of the Syrian Events was in fact the very same media that provided scenarios, and then the states’ and countries’ policies were managed according to those scenarios. Syrian society’s religious trend has changed fundamentally in recent 20 years; meaning that attitude to religion attendance at mosques and religious education has grown controversially. I will explain the government attitude in specific reasons.

Dominance of Extremist Islamist charities on poor societies, donating to them and promotion of radical ideas are among the other reason for the growth of extremism and Salafi thought. Pointing to Islamic Revolution of Iran, I should say that when Islamic Republic was formed, the Resistance was formed beside it, conveying special features for the public opinion in the world. A strong and working government that actually competes with the world powers and do not retreat. Besides that, there is a resistance trend which is successful in different experiments and could compensate the long period of Arab failure. The opposite spectrum, Salafi and Wahhabi, was challenged in public opinion; therefore tried to seek new alternatives. The extremist spectrum was that alternative. At one point, in 2006, after the 2006 Lebanon war, when Beirut was occupied by Hezbollah to protect the city infrastructures, Saudis threatened Hezbollah that if they do not leave the city, they would bring groups into the scene which are 10 times more powerful than Hezbollah. Those were Al-Qaida and Takfiri groups. That is why we observe the events in Nahr al-Bared; in which the so-called Saudi- supported groups outbreak with Lebanese Army. In fact, it was the alternative that Saudis were trying to amend the shortcomings in the eyes of the public opinion.

I will explain the specific reasons very quickly: Syrian government involvement with the brotherhood and the migration of some of its leaders to Saudi Arabia and learning the Wahhabi thought; Syrian government defects and faults to prevent the propagation of Wahhabi thought in rural communities; events in Iraq and using the leverage of Takfiri and Salafi groups by Syrian government against U.S. After the occupation of Iraq by U.S and the fall of Saddam Hussein, the Syrian government did not accept the condition. Therefore, Syria turned into a link between extremist movements which had been trained in Palestinian camps in Lebanon, Nahr al-Bared in particular, and operated against U.S forces in Iraq. Being a link, on one hand helped to the growth of these groups, and on the other hand was the cause for the presence of these groups in Syria. These were the main reasons for the current situation.

Since the word “consequences” is mentioned in the title of the meeting, I would explain 2 ideological and geopolitical consequences of the Takfiri groups in the region. The ideological consequences include, pitting the Islamic approach in the region; polarizing the Muslim community; growth of religious- intellectual debates; reducing the appeal of Islamism; undermining the foundations of religious thought; normalizing terror and violence in the name of Islam. It is true that we paid the expenses for the civil war in Syria, but the good point is that the American Islam became apparent in recent developments. The concept that Imam Khomeini used to say from the very beginning of Islamic Revolution that “there is difference between American Islam and Noble Islam” became clear. It was too hard to show the American Islam to the world, but now this violent Islam demonstrates itself.

The geopolitical consequences of the growth of Takfiri thought are namely, neglecting the danger of the Zionist Regime as the main concern of the Muslim world; wasting the ability and power of the axis of resistance; continuity and fixation of Takfiri thought in the region which is very dangerous; as well as fixing the trend to challenge the Islamic Republic of Iran. One of the options here to be mentioned is that now in the debate of post Daesh era, they want to change the function of Daesh. In their opinion Daesh must be maintained. For example they want to migrate them into new areas to create new crises.  One option is to make a buffer zone in Iraq- Syria borders to make a gap between Iran and west Asia; to keep Iran far from the Axis of Resistance.

Dealing with Takfiri groups, we have hard and soft options, which the latter is more important. Remaining of the Takfiri thought in the region is really dangerous. We should work on it. What we do is very important; more important than dealing with it. There are some Sunni clerics who are traditional like Mohamed Said Ramadan Al-Bouti, Abdulkarim Al-bazm, who are Salafi. They do not accept us as Shia but also do not believe in an armed movement against the government. We should use such a capacity. One of the potentials is to make a change in religious lessons in Syria. Another is the legal explanation of issues rising from the crisis. In this regard, some good jobs have been done. In a conference in Qom, a four-volume collection named “Fiqh Al-azma” published by the Syrian Ministry of Religious Affairs with the help of us which is to confront religious thoughts of these groups.  Shia clerics must not have any article in books like “Fiqh Al-azma”; such thoughts must be answered by specific literature of Sunni clerics. The collection had a good feedback. We must continue such jobs. I believe that such works (the mentioned book) are more effective than the Qom Conference. Qom products can have a reversal effects on Sunni community. Thank you