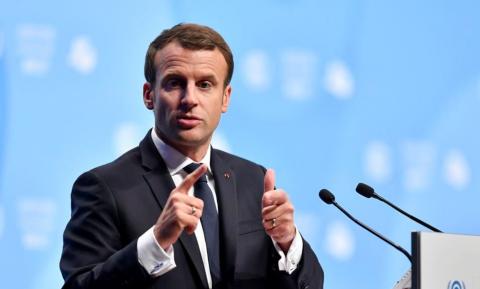 It seems that the complex entanglement of Middle Eastern equations has entered a new phase due to the events of the past few weeks and after Saad Hariri’s resignation. This resignation, which was done in a completely unusual way, has now brought the leg of another actor. French President Emmanuel Macron Began to take action after the resignation of Hariri and his presence in Saudi Arabia; After consultations and visits between the Saudi and French authorities, Saad Hariri entered France and was treated as a prime minister by Macron. Perhaps at first glance, France’s involvement in the recent developments in Lebanon due to its historic status with France and the existence of economic and political ties between them are not very unexpected. However, France has always played a role in Lebanon’s developments since its mandate in Lebanon, Issues that occurred after the assassination of Rafic Hariri and its support of March 14 issue.

But what is important about France’s intervention in the resignation of Hariri from the perspective of Iran is the inclusion of anti-Iranian remarks by the prime minister of Lebanon in the context of his resignation, which was read aloud on the Al Arabiya television channel of Saudi Arabia, along with Mr. Macron’s positions regarding Iran’s regional influence and missile program.

The aforementioned issue suggests that it would be possible to consider France as one of the sides of the axis formed against Iran. What upgraded this possibility is some of the movements in France and its consultations with Saudi Arabia, Israel and the United States. Perhaps the Macron and Tramp’s agreement to prevent Iran’s Regional Influence and the Macron phone call with Netanyahu in this regard may reflect the formation of a new phase of a regional coalition against Iran; Because the recent statements by the French authorities on Iran have provided evidence to observers about the emergence of a kind of convergence between France and the regional coalition against Iran.

Right now, after France’s explicit defense of the Joint Comprehensive Plan of Action (JCPOA) and the need to preserve it, what we are seeing is the attempt by Emmanuel Macron to separate nuclear accord from regional influence and Iran’s missile program; and Meanwhile, he has even championed the need for some sanctions to force Iran to negotiate. Macron’s approach to JCPOA and the explicit opposition to Tramp’s positions in this regard are primarily reminiscent of France’s independent policy towards the United States; what even Macron referred to in his explanation of how he and Tramp shook hand at the recent NATO summit is a sign of his disagreement; but the approach of the French president seems to be the point where we will soon see redefining of the relationship between France and the United States, similar to those of the Sarkozy era.

Indeed, the problem is that France, although has not been inclined to undertake the principles of Gaullism during the presidency of Macron, its recent position in relation to Iran and the agreement with Tramp provided the speculation that most likely, the continuation of such a move by Macron will not leave room for the independent politics of France.

The author believes that the confrontational policy of Saudi Arabia against Iran and its proximity to the Zionist regime are part of the Middle East strategy of the Tramp, which the inclusion of France along with this strategy will definitely have implications for the Islamic Republic of Iran.

The first effect of such a problem should be the use of Saudi-Israeli propaganda to legitimize its confrontational policies towards Iran. The addition of a European country to the bin Salman-Netanyahu-Tramp triangle can provide a good basis for furthering “Iran phobia” project in the region and reinforce the possibility of connecting other countries with this program.

It seems that Lebanon and Saad Hariri’s resignation can be considered the starting point for the Middle East to enter the post-ISIS new era. The entry of the Middle East into the post-ISIS era and the end of the military operation against ISIS, engage regional and trans-regional actors in a political race, the important feature of which is not uniformity of alliances shaped by the ISIS coalition. In other words, the process started after ISIS, which most likely the first and foremost result of it will be determining the future status of Syria, will govern new coordinates in the Middle East, which will be completely different from the earlier coordinates. The end of ISIS can trigger a kind of overlap between the regional and trans-regional actors in which it would not necessarily be anticipated that the ties between Russia and Turkey with Iran would remain as they were in the era of ISIS. Under the new conditions, not only France, and possibly other European countries will redefine regional equations and equilibrium, but Russia will also engage with Regional rivals of Iran in a flexible game.

From the author’s point of view, analyzing the involvement of France in the Lebanon issue and the convergence of its anti-Iranian positions with the United States and Saudi Arabia with regard to the post-ISIS Middle East, is a starting point for new regional queues which undoubtedly will have its own special effects in the near future on the Middle East. How will regional and trans-regional actors compete to determine their position in post-ISIS Middle East and whether the post-ISIS Middle East will rise from the ruins of a war is something that, in the current context, may not be very predictable.