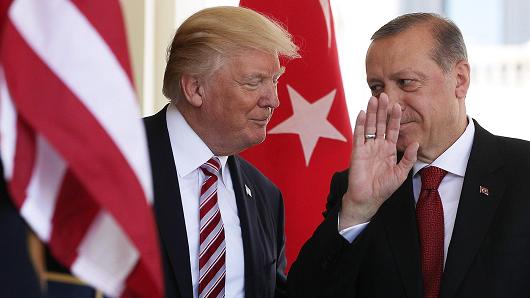 With regard to the effective variables in Turkish – U.S. relations in recent months, Turkey’s irritation over the U.S. refusal to deliver Gülen, the leader of the Gülen movement (known as Hizmet meaning service in Turkish) to Turkey is worth mentioning. Mr. Erdogan believes that the coup last year was carried out by Gülen’s agents, and he frequently asked the United States for his delivery, while the U.S. government (neither Obama nor Tramp) had not delivered so far, and Turkey is upset about this. The second most notable variable is Turkey’s irritation over American support for the Syrian Democratic forces. Turkey is irritated by the fact that the United States supports the Kurdish forces that are part of the Syrian Democratic People’s Party, and defending forces known as PYD, used by the United States against ISIS, and has repeatedly requested that these supports not be carried out. But so far, the United States has not paid much attention to this issue. Turkey sees the link between the PKK and YPG and PYD, their territorial integrity in the future, and the PKK’s progress through Kurdish forces in the Mediterranean, as a threat for its territorial integrity, security and national interests.

Since 2013, after the failed coup, 150,000 people have been dismissed in Turkey; actions have been taken against the Gülenists, many of them have been arrested and imprisoned; these have been the subject of protest by the United States and Europeans, and have badly affected the relationship between them and Turkey. A referendum to change the constitution also sparked US and European criticism of Turkey’s performance. The set of these issues has been an effective variable in Turkish-American relations, but has not prevented their strategic relationship; Because Turkey is a member and one of the NATO bases and the United States needs Turkey in the region, and Turkey needs help from the United States. In addition, there are other factors which have a significant impact on Turkey’s relations with the United States, including Turkey’s relations with Russia, Iran with Israel and the Arab countries. But in sum, there are more parallels than conflicts between the two countries.

Development of Turkey’s relations with countries like Russia will cause US dismay, but the other side of coin shows that the United States wants to use Turkey to influence its relations with other countries; So the two countries need mutual cooperation. However, in general, Turkey has placed itself in the capitalist system in development programs; as the United States is at the head of the world capitalist system, Turkey has to cooperate in attracting capital and technology from the United States. As has been done in the past, with the use of American capital and technology, large projects in Turkey are operational. All of these are very important. With regard to military technology, the US supports assembling factories in Turkey; The latest US military technology is being given to Turkey; Recently, a contract for the transfer of several F-35 fighter jets has been signed between Turkey and the United States which the same one has been delivered to Israel, while not every country has this kind of fighter jets. The total of these cases is the reason for the establishment of relations between Turkey and the United States. That is, differences between the two countries in a few cases will not create a problem in strategic relationships between them. Because the mutual needs between Turkey and the United States prevent serious the decline of relations between them unless there is an unpredictable incident inside Turkey that greatly transforms its foreign policy and Turkey pursues another foreign policy that is very unlikely.

Regarding the similarities of the Turkish-American positions in Syria and Iraq, it seems that there are no serious dissension between Turkey and the US, with the exception of the PKK issue, which created the disagreements between them in Syria. Turkey is more susceptible to YPG and PYD issues; if the United States considers Turkey’s concerns in this regard, it seems unlikely that there would be serious conflicts between them. There may be minor controversies, but there will be Turkish-American cooperation in Syria. Although Turkey cooperates with Russia and Iran, it is undoubtedly coordinating with the United States behind the scene. It’s the same in Iraq. There is no serious conflict between the two countries, and even Turkey is in some ways considered by the United States The United States does not want Iran to be an absolute actor there, which is not, of course. However, the Shiite Iran, which is allegedly a supporter of Shi’ites in the region, has actually caused the annoyance of Turkey and the United States. Therefore, the role of Iran in the formation of The Popular Mobilization Forces (PMF) in Iraq and now its presence there to fight ISIS has caused the sensitivities of the United States and Turkey. Because there is a consensus between the two countries about Iraq-both in the fight against ISIL and terrorism as well as in other domestic issues-if the United States supports more Turkey in its Kurdish problem, their Common political position and interests will increase.

What is clear is that Turkey, as a NATO member (NATO also has a military base there), is important for America and Europe. The interest of the United States in the role of Turkey in the Middle East in terms of aligning with the United States cannot be concealed; particularly, the sensitivities of the United States to Iran’s presence in the region have increased the US’s need for Turkey in the Middle East. Therefore, Turkey-US relations will increase in the future despite some disagreements; because their agreements and common interests are more than regional disputes. In other words, the mutual interests of the two countries are superior to their disputes, and this will create more relations between them. With the exception of the Kurdish problem and some of the disputes of Turkey with countries such as Saudi Arabia and Israel, there is no serious disagreement between Turkey and the United States in the region; but all these disagreements are not prioritized.