Opportunities and threats of Muslim minorities in the world 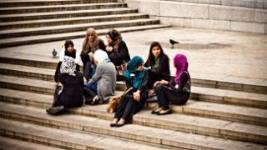 In western countries, laws give Muslims the right to work but in some of these countries there are specific pressures like in France where opposed to hijab and known it as anti-secular or people cannot have hijab also introduced hijab as an Islamic symbol. Even thirteen-year-old girls excluded from school because of wearing hijab

and beyond that, Muslim girls who don’t wear headscarves barred from education because they do not attend mixed swimming classes. They had created legal restrictions on job issues. for example many countries where appear not to have any limitations, are trying to limit and pressure Muslims in different ways.

They have different excuses for this pressure. Actually there is a hidden pressure on Muslims which can lead to islamophobia. We’ve witnessed that the influx of Islamic centers, mosques and veiled women in western countries has increased. This results from the propaganda by the mass media, political parties and groups. behind these Islamophobia propagandas, are Zionists. The important point which should be mention is that the Zionists have shown the Muslim as the enemy of the Christians, while Muslims believe and respect the Christian believes who  make up the majority of European countries. For example in Islam viewpoint, Mary and Jesus (peace be upon him) are holy and  although Muslims believe that Bible is distorted, they recognize Christianity as a religion.

But Jews generally don’t believe in Christ and Christianity also they believe that no miracle has occurred or Jesus is the sin son of Mary. In the meantime the Zionists have been able to describe Muslims as the enemy and opposite of Christians due to their media control and introduce Jews as friends of Christians. In fact, with secrecy, unfortunately Muslims have failed to clarify the facts for Christians. Actually if the Jews view to the Christianity and the Christian be clear for the west, it could lead to the isolation of Zionist regime. So that in the Talmud, non-Jews including Christians are talking animal who must be served the Jews. But they don’t dare to introduce their views.

Identity and Muslim minorities in the world

In countries where a kind of racism exists and Muslims are isolated like Britain and France, Muslims have established their organizations and tried to maintain their integrity. So there are many mosques and Islamic centers also restaurants with halal food but in countries where no racism exists and native people haven’t isolated the Muslims in which a kind of integration and cultural assimilation have been formed like in Mexico and Italy and especially in southern Italy. Therefore sometimes Muslims attracted by the society or they got married to natives and their children are attracted to outdoor advertising. It can be said that anti-Muslim racism and isolation of Muslims have become the reason of forming organizations and integrated forums among Muslims. So in the UK, we see that there are Islamic centers but limited in Italy although significant number of Muslim immigrants lives in this country.

In Latin countries or in countries like Brazil and Argentina many Islamic centers have established but that racism which exists among European and American almost  can’t be seen in the people of Latin America and mainly European and American countries have had a type of racial isolation compared to Latin Americans. Meanwhile, in the countries of this region sometimes Muslims are completely attracted during generations and have forgotten their identity. I met people in Mexico whose name or surname was Reza or Rezaee or from Muslim families but even they don’t know where this family came from or Muslim whose children know themselves as Christian and were unaware of their Islamic background.

The most significant threats towards Muslim minorities around the world

The most significant threat is the next generation. Children who were born and educated in this environment are not familiar with Islam, but witness widespread propaganda against Muslims and sometimes because of this reason, they run away from Islam. Because children don’t have enough information about Islam, although their parents were Muslim they didn’t have true understanding of Islam.

Therefore we must concentrate on the second generation, make the Islam known, go beyond the defense level  of Islam and make the Islam known to non-Muslim societies in this way we spread the Islam. The Muslim minorities in these countries are an opportunity and possibility to prepare the ground for introducing Islam. For example in Germany, Muslim decided to distribute 25 million copies of Quran to Germen families but German government tried to prevent this work even forbade the post offices from sending these Quran. In fact, if Westerners who have been bored with their community, recognize the reality of Islam, there will be the possibilities of conversion to Islam otherwise they shouldn’t fear of this issue.

One of the policies of colonialists has been the ‘divide and rule ‘policy. We have witnessed that they try to spread the disputes in Islamic countries and the dispute between Sunnis and Shiites is one of them. However, it would not be ended in this issue and go beyond it. ISIS can be an example, a group who committed many crimes against Sunnis and Shiites and indirectly try to encourage the followers of other religions be against Muslim, they’re going to committ a kind of genocide and make the Muslim renounce the Islam because of  the fear of death. In Myanmar we had witnessed such crimes against Muslims minorities. These pressures will not end here and continue.

The most significant opportunities towards Muslim minorities around the world

In many of these countries education is free for the citizens and one of the western concerns is that Muslims have more children than the non-Muslims and gradually the population of Muslims increase. This is happening in European countries and westerners always warned about this. In western countries due to the less number of children there are some motivations for them, but Muslims who are the citizens of these countries will use these motivations more and give birth to many children in order to use this opportunity more.

This process should be continued. Education is free in these countries and sometimes due to financial problems Muslim are less entered in this field.  In fact countries with more power must help Muslim minority to reach higher academic qualifications. Muslim must have better situation in economic issues and get more integrated till the ruling parties obliged themselves to grant more privileges to the Muslims. Nowadays there are many lobbies in America like Zionist, Armenian and Irish lobby which try to preserve their home country’s interests and make the US government attract their votes and act according to their interests. The most powerful lobby is the Zionist lobby so Muslim must establish more powerful lobby in these countries which try to gain more rights also the number of Muslims put in the list of parliaments As well as getting more integrated to adopt certain rights for Muslims, at least, specify the rights of Iranian religious minorities in Iran for Muslims in the West.

**This article is extracted from the interview with Dr.Abyane

**Disclaimer: The contents of this article are of sole responsibility of the author(s). The Institute For Islamic World Future Studies (IIWFS) will not be responsible for any inaccurate or incorrect statement in this article. The source and the author’s copyright must be displayed. For publication of IIWFS articles in print or other forms including commercial internet sites, contact: editor@iiwfs.com