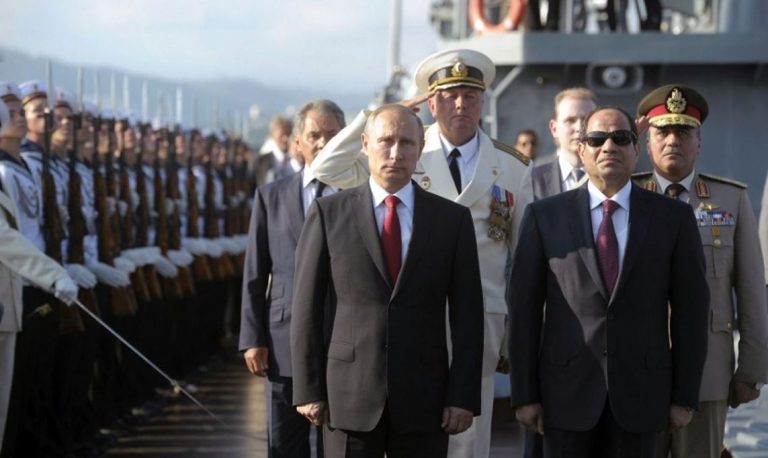 Relations between Egypt and Russia have not been stable. In a historical look, in 1972, one year before the October 73 war, Anwar Sadat expelled 17,000 Russian mentors within a week from Egypt in the context of a strategy of approaching the West. Earlier on May 15, 1971, he arrested a strong pro-Soviet figure, Vice-President Ali Sabri, and Interior Minister Sharawi Juma. But in recent years there has been a shift in relations between the two countries, which its peak is Putin’s trip to Egypt. The following interview explores this issue.

IIWFS: How has Russia’s approach to Egypt and the Middle East been in the past?

Past relations between Egypt and Russia can be divided into two distinct periods before and after the Soviet overthrow. The pre-Soviet period was under the influence of the Cold War. In this period, Russia was paying attention to the United States because of the prominent geopolitical position of Egypt in the Red Sea and the Suez Canal and the importance of penetrating strategic areas in a balance of power with the United States. During this period, we witnessed changes in the Soviet perspective to the Horn of Africa, the north and north-east of this continent, especially Egypt. From this perspective, these areas were a very strategic area, and Moscow invested heavily in the area. Therefore, with the internal changes in Egypt, the Russians succeeded in consolidating their position in Egypt, in the military and economic sectors, such as the construction of the Aswan Dam on the Nile (which was a major project of that era and as a successful project).

After Nasser’s death and the government’s handover to Anwar Sadat, Egypt began to develop relations with Western countries. At this time, Russia’s influence in Egypt was lessened and Moscow’s attention was drawn more toward Libya and Algeria in North Africa, Syria and Iraq in West Asia.

In the post-Soviet era, the new Russia under the rule of Yeltsin tried to continue its presence in West Asia in more cooperation with the United States. In the continued presence of the Russians in the equations of the strategic zone of Western Asia, even Primakov, a Russian architect of the Middle East policy of the late 1990s, could not do anything. Of course, Moscow tried to strengthen its relations with Algeria, Libya and, to some extent, Iraq, but did not have the same influence and presence like before. In recent years, especially at the onset of Putin’s third term, he has tried to rebuild Russia’s Middle East policy. That is why we are seeing a dramatic change in Russia’s view of West Asia. The frequent trips of Egyptian and Russian officials and the willingness of the two countries to expand cooperation since the arrival of the government of Abdel Fattah el-Sisi has signaled Russia’s attempt to return to its ideal conditions in the West Asia and North Africa region; an attempt that has not been apparently ineffective.

IIWFS: What are the bilateral factors for increasing the relations between Egypt and Russia?

Given the insecure and turbulent situation in the West Asia region, especially the presence of ISIS in parts of North Africa, military and security cooperation has become a top priority in relations between Russia and Egypt and at all times, the military government of Cairo has tried to increase arms cooperation with Moscow. The desire of the military government of Egypt to strengthen its defense capabilities and on the other hand, Russia’s interest in and the need to sell military weapons has also been effective in strengthening the military relations of the two countries. On the other hand, the reliance of the economy of the two countries on the tourism industry has led to the potential of the appropriate and extensive cooperation between them.

IIWFS: What is the role of regional issues in Moscow’s attention to Egypt and its role?

It seems that the sustained and historic influence of the West, especially the United States in the West Asia region, and Russia’s desire to compete with the West, is one of the important reasons for Russia’s attention to the powerful countries of the Western Asia region, including Egypt. Russia prefers to support the countries of the region so that there is no room for expansion of the West’s influence in this region. The crisis of Islamic extremism in the West Asian region and the suppression of the power of radical and Salafist Islamists who are active in the crises of the North Caucasus, Chechnya and Ingushia, and challenge Russia’s internal security, is another reason to convince Russia to establish closer relations with this Arab country, which is prone to radical Islamism. The uprisings and the so-called Islamic Awakening have left Russia, as well as other major powers, with concerns and challenges; in a way that the Russian government seems to have changed its traditional approach to achieving its goals and interests in West Asia.

Of course, along with these regional issues, the Russian National Security Strategy, adopted in 2009, should not be overlooked either. This document, which shows Russian foreign policy by 2020, suggests that, although Russia does not intend to confront the West, it must try to increase its relations with Latin America, Africa and Western Asia in order to face globalization and national interests.

IIWFS: What is the effect of changing the US foreign policy approach from West Asia to the Far East on Russia’s growing role in the Middle East?

The United States has bitter experiences in West Asia that has pushed the country to other strategic areas. For many years, this country has tried, through direct and military intervention, to advance the government-nation-building process in the West Asian region in its own way, in order to secure its long-term interests; however, the bitter experience of defeat in Afghanistan and Iraq has shown to US officials that the region stands by its own identity structure against imposed change and will eventually leave nothing but financial costs, military casualties and unreliability for the United States. The results led the US government to decide to transfer security costs to the neighbors in the region that are aligned with the US to focus its foreign policy towards lucrative and low-cost areas such as East Asia. Such a decision was made with the logic that, firstly, because of the distances, changes and unrest of West Asia, there was no direct and indirect influence on the United States, and secondly, it could continue to boost the economic prosperity of the exhausting superpower by purchasing weapons from the United States.

Russia, however, does not have the same status or experience as the United States; this country has not come to the attention of the people of Western Asia as an interventionist force, and therefore its presence in the region is less opposed, and even some countries consider Russia as a savior power against Western interference. Sergei Markov’s words, Vladimir Putin’s Foreign Policy Advisor, is witnessing this claim; he says: “Moscow is returning to the Arab world because Arab governments ask for such a thing. They are looking for people other than America and Saudi Arabia to rely on. “

On the other hand, because of the geographical proximity to West Asia, Russia is more affected by the developments in this region, especially the outbreak of extreme Islam. Therefore, over the past decades, the country has always been looking for an opportunity to expand its influence in West Asia without any serious confrontation with Western powers, especially the United States, and make its developments to its advantage. Now that the US government has deliberately left the West Asia, it is natural that Russia seeks to fill this vacancy and shape a new order in accordance with its goals and interests. An increase in the relationship with Egypt is also analyzable. In sum, the Russians, by understanding Egypt’s privileged position in the Arab world, are trying to use the relative absence of the US in Cairo’s foreign policy to do their best to return to Egypt within the framework of the modernization of the Moscow-Cairo relations and the signing of treaties on energy and military weapons and the increase in diplomatic traffic between the two countries in recent months is indicative of this fact.

IIWFS: What are regional and international actors looking to increase relations between Egypt and Russia?

It does not seem to be possible to give a comprehensive answer to this question; Because the regional countries and the trans-regional powers, depending on their policies, have a different approach to Russia’s policies in general and its policies towards Egypt in particular. However, in a general assessment, it can be said that although Western countries and their regional players, such as Saudi Arabia and the United Arab Emirates, are not so pleased with the new role played by Russia in the region, the level of political and strategic relations between Russia and Egypt has not yet reached a level where they feel seriously worried and take steps to confront it.

On the other side, there are countries that consider and welcome the development of Russian-Egyptian relations. Opposing -defined countries are among the countries that consider Egypt’s approach to the Russians as a positive step towards separating Russia from the United States in their favor and welcome it. The reason for this approach is that, as Turkey’s proximity to Russia improves its relations with Iran and changes its stance towards Syria, an increase in relations between Egypt and Russia may also help to clarify the prospect of Egypt’s relations with Iran and other members of the opposing countries.

IIWFS: What are the future and scenarios of these relationships?

It seems that there are different scenarios in this regard; The most serious scenario is that the current trend of increasing Russia’s role in West Asia will continue in the current order, in which case we should expect Russia’s relations with Egypt to deepen in the coming years. The other scenario is that the United States feels threatened by the growing influence and power of Russia, and will make Egypt to return to it with a return to military and financial assistance. Another weak scenario is that, in the coming years, the countries of the region will achieve a certain degree of maturity and strategic independence, and will rely on the power of their peoples and interregional cooperation to ensure their own order and security; In this case, Russia’s role, like the US, will be diminished in the West Asian countries, including Egypt.