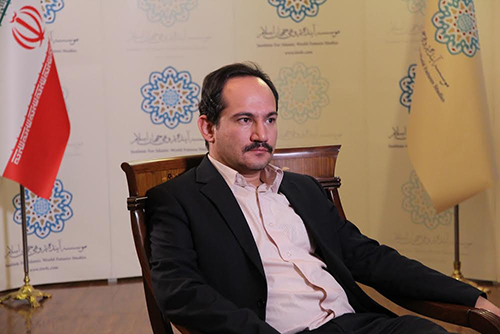 First of all, I’d like to  thank Dr. Hamoudi and his colleagues for organizing such an important conference and I know that it’s been hard to organize it.

Recently, it was the centenary of Sykes-Picot Agreement. Since 1916, Western Asia has been under the will, control and plan of international powers. it’s contemporary history has had many ups and downs. First, the region was a prey for competitions of colonial superpowers. And after the Sykes-Picot Agreement it became the backyard of European powers. By the defeat of Arabic nationalism led by Gamal Abdel Nasser, hopes for reform from inside the region disappeared and Arab society experienced frustration and despair. None of American plans for the region such as CENTO alliance, initiative of Eisenstadt, Casablanca Economy Program and…. were based on local interests and had no brilliant result for the countries of the region. Shimon Peres’plans on imposing of non-conventional nuclear weapons, the unfair Oslo Accords and biased supports of USA in favor of Israel have caused more security complexity in our region. Oil-driven wealth led the superpower’s strategies to promote consumerism, to support corrupt but obedient regimes, and to create insecurity to convince regional governments to massive purchase of arms from western countries; and caused an unwritten agreement between the oil states and regional powers based on the purchase of arms from Western countries in exchange for guaranteeing the survival of the government which lasts until today.

Emphasizing the internal roots of formation of the deplorable crisis of Daesh, we can assess the post- Daesh period by the provided introduction. But which theoretical framework and which analytical level should be considered for this issue? Many scholars and experts on security studies believe that after the cold war, the regional level is the position of controversies, competitions and cooperation among states. Therefore if we want to determine the level of analysis, the regional level would be the answer. one of the theories that can help us understanding the regional security developments is regional security complex theory which is rooted in Copenhagen School. According to Barry Buzan and his colleagues in this theory, a regional security complex is a set of units in which major processes of securitization or desecuritization or both are so entangled and linked that their security problems can’t be analyzed or solved apart from each other. The other point in this theory is that security must be viewed as an extended and multi-dimensional issue. In western Asia, as a standard security complex, it’s the regional powers which determine the type of polarity. In addition to distribution of power, the central point in Buzan’s theory is the amity& enmity patterns in the region that I believe it needs much further scrutiny. The experiences of the last century suggest that whenever we were in search of security solutions from outside of our region, the region has faced more crises. Due to time constraints, I will end up my theoretical discussion with this comment that despite the interventional role of trans-regional powers, if we are in search of security, the security must form from inside the region; and the theory of regional security can be a good model for the security of this region. I will finish my theoretical comments by a verse of Holy Quran “Allah does not change what is in a nation unless they change what is in themselves.” If we are looking to change the status of our region, we should start changing ourselves. We hope by establishing a collective security system in western Asia, the future security crises like Daesh would be prevented.

In the second part, I would discuss the opportunities and threats which are created by Daesh for Iraq after achieving the victory over Daesh. The very first opportunity is that after defeating Daesh, Iraqi nation recognizes their friends and foes who supported Iraqi nation in defeating Daesh and who sabotaged and acted against the Iraqi people. The second opportunity due to the presence of Daesh in Iraq would be the weakening of the Takfiri thought; if there were controversies about being good or bad or the danger of the Takfiri thought, now the danger of Takfiri thought is obvious. The third opportunity which Daesh created for Iraq is that the role of religious authority as social capital is now clear for Iraqi people. And the forth is that Iraq now can open handedly manage its foreign relations.

In the next stage I want to talk about the potential threats for Iraq in post-Daesh era. The first threat may be the imposing of security agreements to Iraq by superpowers. The second may be conflicts on liberated zones between Erbil and Bagdad. Now, Kurds are among the effective forces in fighting Daesh; and if not leaving the occupied area, there would be the potential of conflict between central government and Kurdistan region which if not managed, may turn into a crisis. Next point is that despite Iraq’s amity towards all countries, less democratic countirieswon’t accept Iraq as a successful model for governance. They would employ other scenarios to prevent the success and victory of Iraqi nation. Shifts in operations from military stage into security one after liberating Mosul would be the next point. Historical experience suggests that as long as democratic regimes are in case of war and insecurity, peoples demand decreases to its lowest levels. But as soon as Daesh threat is removed, people’s demand would increase and Iraq’s government must be aware of that and have a plan for that; because due to economic and administrative problems, it would be a hard job. Another point is that after defeating Daesh, attacks to Al-Hashd Al-Sha’abi (PMF) would increase. Right now, anti- terrorism operations by Al-Hashd Al-Sha’abi (PMF) has been successful, but in post- Daesh Iraq, Al-Hashd Al-Sha’abi (PMF) would be accused of sectarianism an etc. Insecurity and war experiences all over the world have shown that after wars, there would be infestations to hand over the government to technocrats and to push back those who participated in the war. I request you to not to forget those who helped you in these tough days.

At the end, I appreciate and say hello the Iraqi nation and great elites of Iraq who stood resolutely against the plans of ill-wishers for Iraq; and I finish my speech with a verse from Holy Quran “So when you have finished [your duties], then stand up [for worship].” The end of Daesh would be the start for reconstruction of Iraq and I hope you to be successful in this matter.