Geopolitical Implication of the Turkish Coup for Iran 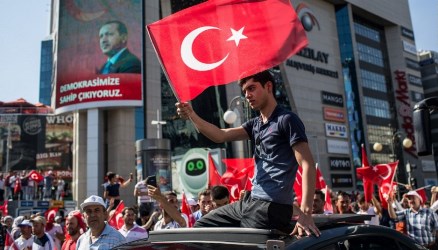 Dr. Reza Ekhtiari Amiri/ Professor at the University of Mazandaran

Turkey has recently experienced a failed coup attempt aimed at overthrowing Recep Tayyip Erdogan’s government. As a turning point in the history of Turkey, the incident has had some significant internal and regional outcomes. Relating to that, it seems that the coup has led to some positive geopolitical implications which will eventually intensify the balance of power in favor of Iran.

On 15 July 2016, a coup d’état attempt was carried out by a faction within the Turkish Armed Force that had organized itself under a council called “the Peace at Home Council.” The Turkish political earthquake gave rise to wide arrestments of dissenters or those linked to the Gülen movement. Meanwhile, Erdogan endeavored to reinforce his position as president in the political structure of the country. The coup also affected the foreign policy arena, and accordingly, Erdogan reconsidered Turkish relations with some countries in particular Iran and Russia.

The main factors which helped forming the geopolitical implications are:

1) Iran and Russia’s immediate support of Erdogan after the coup.  Though Iran and Turkey held different views regarding regional developments, the former did not wait for the coup’s failure to speak up. Close on the heels of the event, Iran’s foreign minister and president condemned it. Only hours after the coup, also, Vladimir Putin, Russian president, convoyed his sympathy, goodwill and best wishes for Erdogan’s success in restoring constitutional order and stability as soon as possible.

2) Ankara’s paranoia about a potential U.S. hand in the failed coup. Most certainly, the needle of suspicion points its roots in the fact that the two F-16 aircrafts and the two tankers to provide mid-air refueling for them and used in the coup attempt actually took off from Incirlik.

3) Uncertain and unclear status of European Union leaders against the coup. Put differently, some European leaders have been “suspicious” about the originality of the coup. Therefore, they did not adopt a clear status about the incidence. In this relation, Johannes Hahn, European Commissioner dealing with Turkey’s EU membership bid, said it appears Turkey’s government prepared arrest lists of political opponents before the coup attempt and had been waiting for the right time to act.

4) Possible role of Saudi Arabia and the EUA in the coup. These Turkey regional friends not only did not denounce the coup immediately, but also merely labeled it a Turkish “domestic matter”. In this regard, the famous Saudi whistleblower known as ‘Mujtahid’ has come out with a sensational disclosure that  the UAE played a role in the coup and had kept Saudi Arabia in the loop.

These elements gave rise to some geopolitical implications that would further Iran’s interests in the Middle East region.

First, reinforcing the Iran-Russia strategic weight: Iran and Russia’s support for the Erdogan government after the coup caused the latter to reconsider its relations with Tehran and Moscow. Accordingly, these countries have recently improved their relationships and cooperation. Erdogan’s meeting with Hassan Rouhani, and in particular with Vladimir Putin, after a seven-month crisis between Moscow and Ankara, can be considered the evidence. In fact, thanks to Turkey’s suspicions towards the West’s intentions and its accusing them of “siding with coup plotters”, Erdogan decided to move closer to Iran and Russia’s camp and cooperate with them closely. Turkey and the Euro-Atlantic region have been experiencing tensional relations after the coup. Prime Minister Binali Yildirim said that the US refusal to extradite the Pennsylvania-based cleric, Fethullah Gülen, would signal an “act of war”. Tension between Ankara and Washington has also caused the US to decide to remove its tactical nuclear weapons from Turkey.

Turkish rapprochement to Iran and Russia has affected the former anti-terrorism policy vis-à-vis ISIS as well. By slamming the West for supporting terrorism, Turkey has already started cooperating with Iran and Russia regarding fighting ISIS in Syria and Iraq. This partnership is considered as a loss for the West’s camp, and it will also increasingly isolate Saudi Arabia and Qatar in Syria. In fact, Turkey’s new position would worsen the Islamic terrorist groups who are backed by the West and some Arab regional states.

Second, strengthening the resistance front: contrary to the will of Saudi Arabia and the West under the leadership of the US, Turkey has been increasingly approaching Iran in terms of the Syria question. Though Turkey has already changed its interventionist policies in Syria and its animosity with President Bashar Al Assad, after this new development in the country and consequently the closer relations with Iran and Russia, Ankara reached an informal agreement with Tehran and Moscow that Bashar Al Assad must surly remain in power in Syria. Through these relations, Mevlüt Çavusoglu, Turkish foreign minister, announced that Turkey wants to normalize its relations with Syria. Turkey’s abandonment of the “regime change agenda” in Syria is a geopolitical victory for Iran; since Assad is Iran’s main ally in the Arab world. In fact, the remaining of Assad in power is the biggest gain for the regional resistance front with the leadership of Iran. Iran’s achievement in Syria would unnerve the US and its regional allies, in particular Israel, which has been hoping that a weakened and fragmented Syria would work to its advantage to permanently annex the occupied territories in the Golan Heights.

Third, a crack in the Sunni alliance: Saudi Arabia’s relations with Turkey had improved during the past months. The two countries carried out joint drills and also signed a bilateral agreement to establish a “strategic cooperation council” aimed at deepening military, economic, and investment ties. Moreover, Ankara backed Saudi Arabia’s war against the Houthis in Yemen and sided with Riyadh in the Saudi-Iranian spat which followed Sheikh Nimr Baqir al-Nimr’s execution. Indeed, Ankara and Riyadh had planned closer regional strategic partnership to reshape the Middle East’s geopolitical order. However, due to Saudi Arabia’s reaction to the coup and also the releasing of some news revealing Riyadh’s likely role in the coup, amid Iran’s supported for Erdogan’s government, Ankara will change its relations with Riyadh to some extent. The crack in the Sunni Turkey-Saudi coalition would help Iran face the Saudi threat in the region in an easier way. On the other hand, Riyadh would lose a potentially key and valuable partner in the Islamic Military Alliance to Fight Terrorism (IMAFT) at the time when Saudi Arabia has prioritized to run counter to the Shiite threat posed by Iran and its allies.

Forth, Tehran-Ankara cooperation vis-à-vis a possible Kurdistan state: The US has been supporting local Kurdish tribes in northern Syria and even establishing military bases in this region. Ankara has been wary of the US plan which it suspects would be a stepping stone leading to the creation of a “Kurdistan”. Meanwhile, Iran alleged that the US is attempting to create a Kurdistan state carved out of neighboring countries with Kurdish population, which will be a “second Israel” in the Middle East to serve Washington’s regional interests. The same viewpoint regarding the potential threat of a Kurdistan could help the two states work more closely and also cooperate in other regional matters.

In general, the failed coup in Turkey resulted in positive achievements for Iranian leaders. Turkey’s approach to Iran and Russia has enhanced the strategic weight of Iran against the West, and in particular the US. Now, Iran is enjoying an upper hand in the region, and the balance of power has shifted in favor of Tehran more than before. Turkey, Iran and Russia’s cooperation will help Iran encounter its foes like Saudi Arabia and the US, and will also help Tehran fight more strongly against regional terrorist groups like ISIS. Put differently, the regional order is shaping based on Iran’s interests.

Disclaimer: The contents of this article are of sole responsibility of the author(s). The Institute for Islamic World Futures Studies will not be responsible for any inaccurate or incorrect statement in this article.