Does Trump follow a particular geopolitical strategy in the Middle East? Ahmed Rashidi-Nezhad 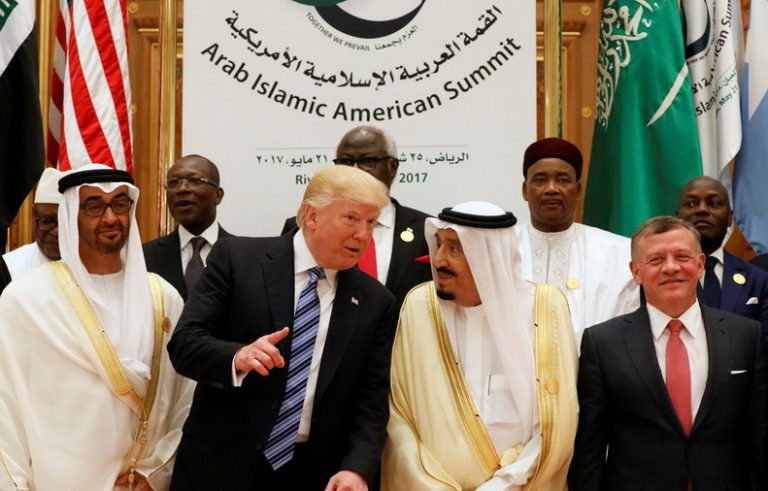 Does Trump follow a particular geopolitical strategy in the Middle East?

Contrary to some of the predictions with the assumption that “economy-centered” state of Trump’s government restricts the businessman-president’s goal merely to “profit” the United States, unquestionably, if the United States does not have a definite geopolitical agenda in global disputes, rival powers will gradually seize this country’s position in the global power structure. Thus, recent movements in the Middle East can be interpreted as containment strategy in order to reduce the influence of the two powers of Iran and Russia in the region.

Major geopolitical ideas as geographic strategies are thoughts (written or unwritten), which, with the idea of the integrity of the global politics system, believe that It is possible to dominate the world or parts of it only by dominating certain regions (such as Hartland, Rimland, the decision area, …). In fact, in this way, it will be signaled to foreign policy officials to prevent the expansion of the influence of actual and potential rivals in these areas. Decades before Mackinder focused on Hartland as the land dominated by global rule for its rulers, and thereby highlighted the importance of some territories (regions) in playing the power of global rivals, Russia and Britain, the two great powers of the nineteenth century, had taken an effort in Central Asia, later called the “Great Game.” Based on this game, the Russians considered it obligatory for themselves to be close to Istanbul and India, based on the will of Peter the Great (1625-1772) – a geographic strategy and perhaps a model for the geopolitical views of the twentieth century; because, according to this will, everyone who came to Istanbul and India would be the real ruler of the world. Apparently at that time, this emphasis was due to the fact that India was the most important British colony, and in addition to its enormous wealth in British global hegemony, its warmer coasts (also reaching the Dardanelles and Bosporus Straits) were considered as a dream for the emergence of the Russians from the geographical strait of Hartland. At that time, on one hand the Russians had to travel from Turkestan (Central Asia) to reach India; on the other hand, the British, who were aware of the Russians’ motives, were seeking to prevent the Russians from taking this route to warm waters. Consequently, the regions of Central Asia, and in particular the current territory of Afghanistan, as the territories that will restrict domination of that domain of rival influence, turned into the realm of power. A game that was drawn to other areas (lands and regions) by changing the structure of world power and changing the priority of the powers of this structure in the coming decades and centuries. So that Mackinder’s Hartland (before World War II) was a region that would necessarily have to be controlled to prevent the two British rival powers (Germany and Russia) from being treated either as unity or domination over one another. In the same way, Rimland (after World War II) should also prevent the expansion of the communist influence of the Soviet Union to the margins of Eurasia.

It means that, contrary to some of the predictions with the assumption that “economy-centered” state of Trump’s government restricts the businessman-president’s goal merely to “profit” the United States, unquestionably, if the United States does not have a definite geopolitical agenda in global disputes, rival powers like China and India along with Russia will gradually seize this country’s position in the global power structure; which means that the pattern of global politics that has dominated the West for centuries will collapse.

Kissinger, who is known as one of the most prominent strategists in the United States, has recently highlighted the topic of “New World Order” with an emphasis on the Middle East in an article entitled ” Chaos and order in a changing world “, published on the Capx website, he goes on to refer to the above and says: “Around the periphery of the Middle East, world order is threatened by the turmoil of dissolution. The Westphalian-based system of order that emerged in the Middle East at the end of the First World War is now in a shambles.” Kissinger believes four countries in the region have lost their sovereignty; Syria, Iraq, Libya and Yemen have become battlefields for groups that seek to activate their sovereignty. In the vast areas of Iraq and Syria, the ISIS terrorist group is attempting to substitute a multi-state international system which is governed by the laws of the Sharia through acts of violence. But in such a situation, this old proverb that “enemy of your enemy can be your friend” is no longer applicable. Because in the Middle East, the enemy of your enemy may be your enemy.

It is clear that he means the enemy is ((ISIS)) and the enemy of the enemy are ((Iran, Russia, Syria, and resistance groups that are fighting ISIS)). But apparently, as much as he is worried about ISIS, he is worried about ISIS’s enemies and his post-ISIS structure. According to Kissinger, most regional actors, including Iran and the Arab countries, agree on the need to eliminate this terrorist group. But what matters is which group is going to inherit ISIS’s territory? A Sunni Coalition or a dominant influence dominated by Iran? In his view, if the territory of ISIL is captured by the Iranian-backed forces, an Iranian belt will be erected from Tehran to Beirut, indicating the advent of the Iranian empire, and would certainly not be favorable to the West. Also, Russia’s new role will be influenced by the kind of order that will arise. Is Russia’s goal only to help defeat ISIL and prevent similar groups from forming? Or does Russian actions arise from the nostalgia of the historical mission of strategic domination? In his view, if the second answer is correct, the reappearance of Cold War patterns is likely. This is all because the West, because of Turkey’s concern for Western-backed Kurdish independence, cannot count on Turkey’s support.

The result is that although areas such as Iraq and Syria are new situations for the United States (which have already been the scope of influence of rivals), Kissinger believes that the modern Western order is now challenged by powers like Iran and Russia in the Middle East. In this context, recent developments in the Middle East could be interpreted as a continuing and radical effort to curb and lessen the influence of Iran and Russia, the two powers in the region. On this, on the one hand, Donald Trump’s recent trips to the Middle East and his meetings with Arab leaders in the region, entitled “Arab Nato”, as well as the meeting with Israeli leaders to balance the Middle East region to contain Iran, and, on the other hand, establishing numerous military bases in various areas of Syria, as well as declaring opposition to a referendum on independence of Kurdistan (to draw Turkey’s attention in line with its country’s goals in the region), is announcing the country’s resolve to tap into the traditional scope of influence of Russia.